This is your chance to dive the Japanese Pacific Fleet sunk at the end of WWII in Truk Lagoon.

If you like “TIN”, this is wreck diving heaven not to be missed!

This is an unmissable, unforgettable trip of a lifetime so book your place with Blue Ocean Diving now!

Alternatively, pop into the Dive Centre, call us on 01622 212022 or contact us via email at scuba@blueoceandiving.co.uk.

All online bookings are provisional and subject to availability.

Payment is to be made by card via HSBC Paylink.

We will contact you by telephone within 48 hours to confirm your booking and process your payment.

Explore the Japanese Pacific Fleet sunk at the end of WWII with diving in Truk Lagoon.

If you like “TIN”, this is wreck diving heaven not to be missed! This is an unmissable, unforgettable trip of a lifetime so book your place with Blue Ocean Diving now!

For Experienced Advanced Sport Divers and Tec divers: THIS IS IT!

Diving in Truk Lagoon – or correctly CHUUK Lagoon – has to be on the bucket list for every Wreck Diver.

With amazing wrecks in clear visibility and tropical waters, this has to be THE TOP DESTINATION.

A few dive sites are relatively shallow, but the scale of the wrecks is seriously impressive. There are a several deeper wrecks with Tec diving opportunities for all. 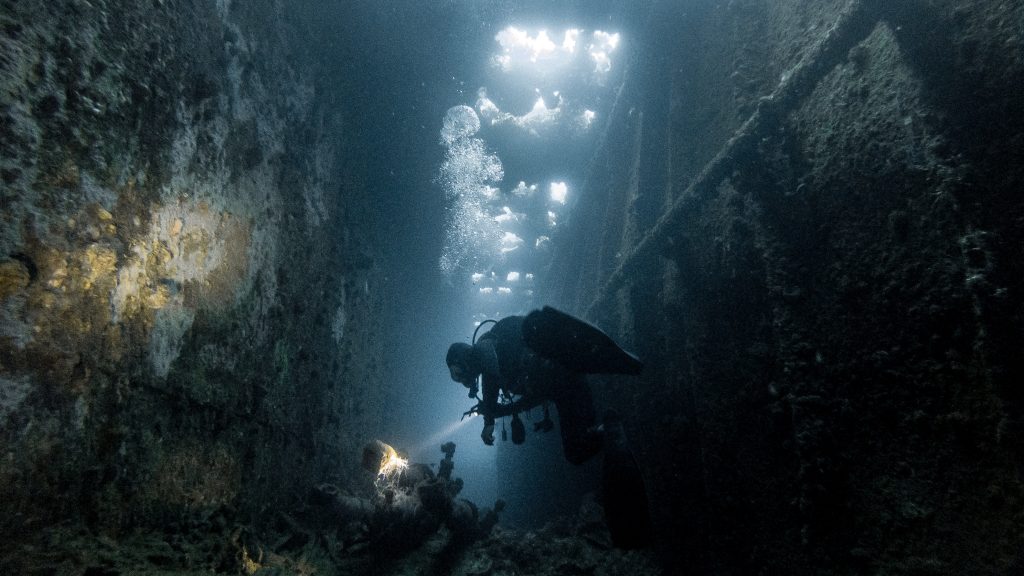 £5900 per person (based on double occupancy) 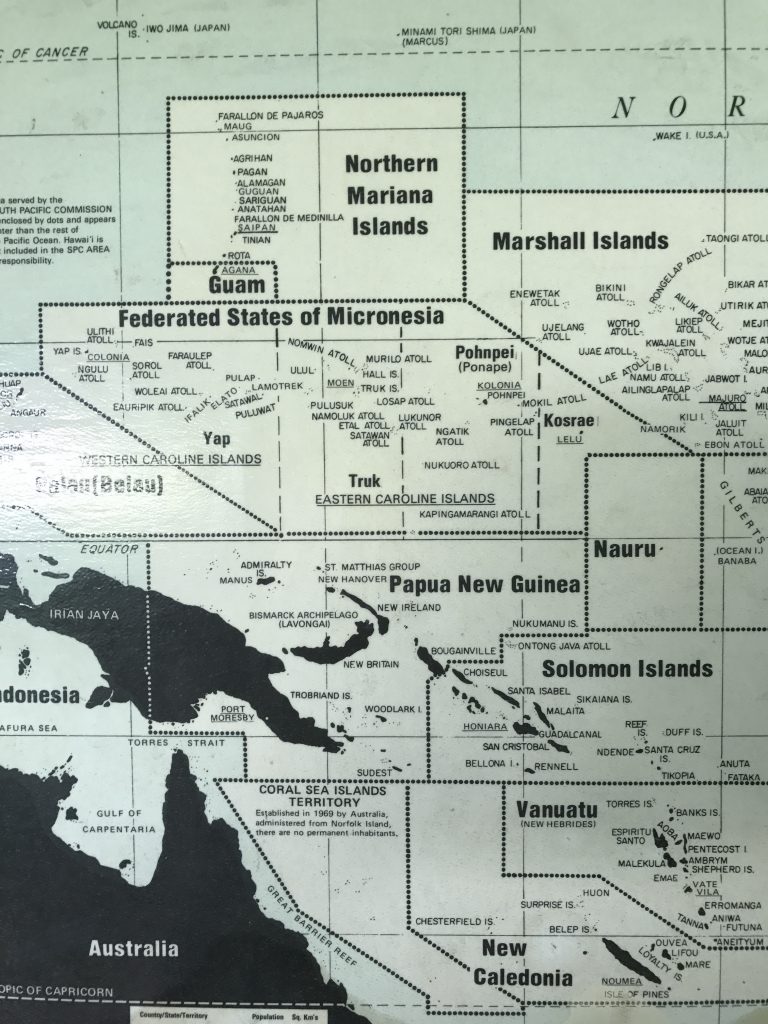 In 1969, French oceanographer Jacques Cousteau and his team explored Truk Lagoon. Following Cousteau’s 1971 television documentary about the lagoon and its ghostly remains, the place became a scuba diving paradise, drawing wreck diving enthusiasts from around the world to see its numerous, virtually intact sunken ships. The shipwrecks and remains are sometimes referred to as the “Ghost Fleet of Truk Lagoon”.

During World War II, Truk Lagoon was the Empire of Japan’s main base in the South Pacific theatre. Truk was a heavily fortified base for Japanese operations against Allied forces in New Guinea and the Solomon Islands, serving as the forward anchorage for the Japanese Imperial Fleet. 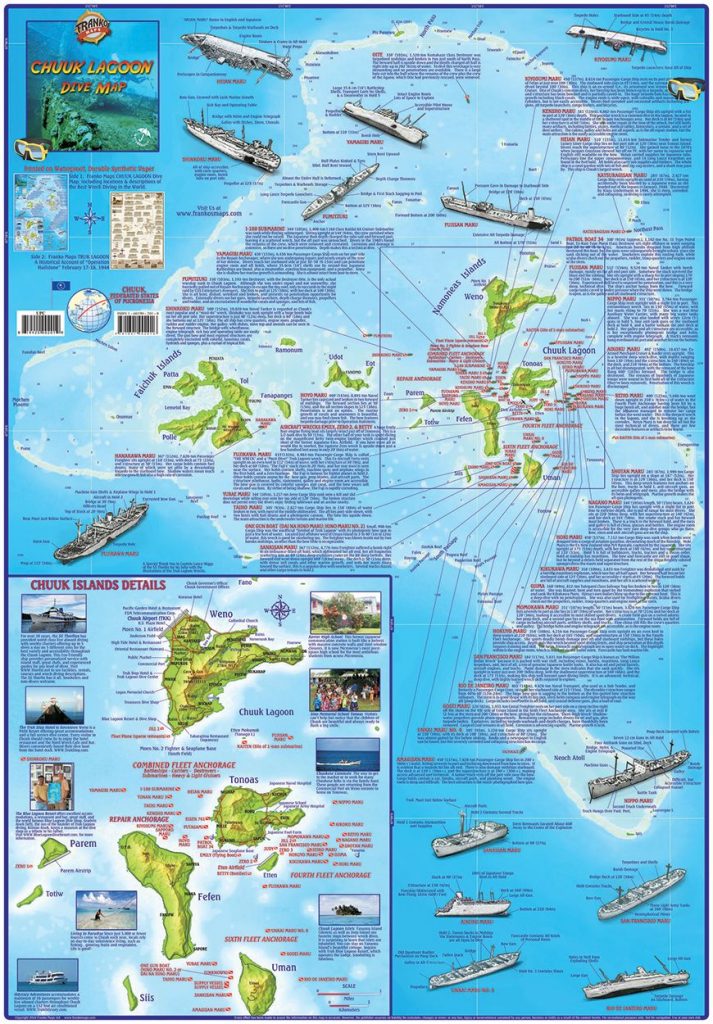 Truk Lagoon was considered the most formidable of all Japanese strongholds in the Pacific. On the various islands, the Japanese Civil Engineering Department and Naval Construction Department had built roads, trenches, bunkers and caves.

Five airstrips, seaplane bases, a torpedo boat station, submarine repair shops, a communications centre and a radar station were constructed during the war. Protecting these various facilities were coastal defence guns and mortar emplacements. Due to its heavy fortifications, both natural and manmade, the base at Truk was known to Allied forces as “the Gibraltar of the Pacific.”

A significant portion of the Japanese fleet was based at Truk, with its administrative centre on Tonoas (south of Weno). 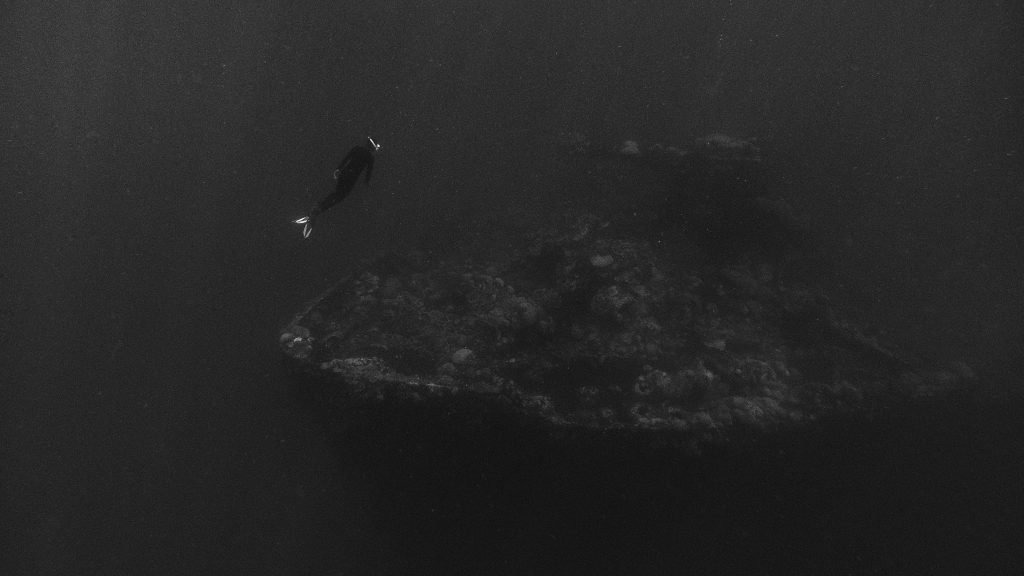 In 1944, Truk’s capacity as a naval base was destroyed through naval air attack. Forewarned by intelligence a week before the US raid, the Japanese had withdrawn their larger warships (heavy cruisers and larger vessels) to Palau.

Once the American forces captured the Marshall Islands, they used them as a base from which to launch an early morning attack on February 17, 1944 against Truk Lagoon.

Operation Hailstone lasted for three days, as American carrier-based planes sank twelve smaller Japanese warships (light cruisers, destroyers, and auxiliaries) and thirty-two merchant ships, while destroying 275 aircraft, mainly on the ground. The consequences of the attack made Truk Lagoon “the biggest graveyard of ships in the world.”

The attacks for the most part ended Truk as a major threat to Allied operations in the central Pacific. The Japanese garrison on Eniwetok was denied any realistic hope of reinforcement and support during the invasion that began on February 18, 1944, greatly assisting U.S. forces in their conquest of that island.

Truk was isolated by Allied (primarily U.S.) forces, as they continued their advance towards Japan, by invading other Pacific islands, such as Guam, Saipan, Palau, and Iwo Jima.

It was attacked again from 12 to 16 June 1945 by part of the British Pacific Fleet during Operation Inmate.

Cut off, the Japanese forces on Truk and other central Pacific islands ran low on food and faced starvation before Japan surrendered in August 1945.

Join Blue Ocean Diving on this trip of a lifetime to see this piece of history for yourself. Any serious diver will tell you that diving in Truk Lagoon is not to be missed!

Details: Twin or double room, continental breakfast included. As we will be arriving in the very early

morning hours on 13 June, this is effectively a two-night stay.

Details: Twin cabin, all inclusive board basis, 6 days diving with up to 5 dives per day, free NITROX for

FLIGHT DETAILS: for reference only

£5900 per person based on double occupancy

£500 payments due every 90 days to Blue Ocean Diving

Balance due 12 weeks prior to departure

– Overnight accommodation in Guam before flight to Chuuk

– 1 night at Blue Lagoon Resort on Chuuk with bed & breakfast

– 6 days diving the Ghost Fleet of Truk Lagoon with up to 5 dives each day, free

– All transfers and taxes

Airline Upgrades: We can arrange for higher class seating and/or extra baggage, please contact us for up-to-date pricing

Single Supplement for Entire Trip: Available at an additional charge of £750

Book online now at the top of the page.

Alternatively, pop into the Dive Centre, call us on 01622 212022 or contact us via email at scuba@blueoceandiving.co.uk.

All online bookings are provisional and subject to availability.

Payment by card via HSBC Paylink.

We will contact you by telephone within 48 hours to confirm your booking and process your payment.

We strongly recommend deposit payments are made via credit card. This is in order for you to benefit from the full consumer protection this method offers.

All balance payments will be taken by card via HSBC Paylink.

All payments are non-refundable & non-transferable.

On booking, please provide a copy of your passport to scuba@blueoceandiving.co.uk for flight ticketing details.

Holiday insurance is recommended from time of booking in case of cancellation.

Please refer to our Terms and Conditions for all Dive Club Holidays.

There are no reviews yet.

We use cookies on our website to give you the most relevant experience by remembering your preferences and repeat visits. By clicking “Accept”, you consent to the use of ALL the cookies.
Cookie settingsACCEPT
Manage consent

This website uses cookies to improve your experience while you navigate through the website. Out of these, the cookies that are categorized as necessary are stored on your browser as they are essential for the working of basic functionalities of the website. We also use third-party cookies that help us analyze and understand how you use this website. These cookies will be stored in your browser only with your consent. You also have the option to opt-out of these cookies. But opting out of some of these cookies may affect your browsing experience.
Necessary Always Enabled
Necessary cookies are absolutely essential for the website to function properly. These cookies ensure basic functionalities and security features of the website, anonymously.
Functional
Functional cookies help to perform certain functionalities like sharing the content of the website on social media platforms, collect feedbacks, and other third-party features.
Performance
Performance cookies are used to understand and analyze the key performance indexes of the website which helps in delivering a better user experience for the visitors.
Analytics
Analytical cookies are used to understand how visitors interact with the website. These cookies help provide information on metrics the number of visitors, bounce rate, traffic source, etc.
Advertisement
Advertisement cookies are used to provide visitors with relevant ads and marketing campaigns. These cookies track visitors across websites and collect information to provide customized ads.
Others
Other uncategorized cookies are those that are being analyzed and have not been classified into a category as yet.
SAVE & ACCEPT